US Secy Pompeo pins blame for hundreds of deaths on China 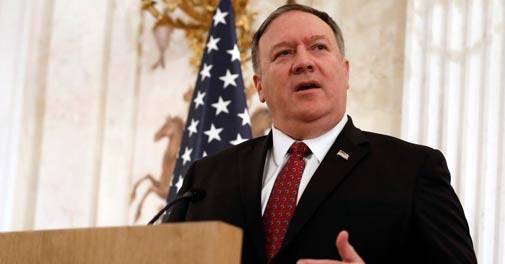 “China is still refusing to share the information we need to keep people safe.” COVID-19 has killed more than 255,000 people worldwide, including more than 70,000 in the United States, making it the worst-affected country according to official statistics. The virus first emerged in the Chinese city of Wuhan in December. Most experts believe it originated in a market there selling wildlife and jumped from animals to people, although Pompeo has said there is significant evidence it came from a laboratory.

Domestic critics of President Donald Trump, including some former officials, academics and columnists, have said that while China has much to answer for in terms of its actions in the early days of the outbreak, the U.S. administration is seeking to deflect attention from what they see as a slow U.S. response.

Pompeo pushed back against suggestions that he and other members of the Trump administration have issued conflicting statements about the exact origins of the novel coronavirus. On Sunday, Pompeo said there was “a significant amount of evidence” the virus emerged from the Wuhan Institute of Virology, having said the previous Thursday it was not known whether it came from the lab, a so-called wet market, or some other place.

On Wednesday, Pompeo said the United States did not have certainty, but there was significant evidence it came from the lab. “Every one of those statements is entirely consistent,” he said. “We are all trying to figure out the right answer. We are all trying to get the clarity.” The Chinese state-backed Wuhan Institute of Virology has said the virus did not originate there.

Dr. Anthony Fauci, director of the U.S. National Institute of Allergy and Infectious Diseases and a member of Trump’s Coronavirus Task Force, said in an interview published on Monday that the best evidence showed the virus was not made in a lab, but appeared to have “evolved in nature and then jumped species.” Trump was asked last week if he had seen evidence that gave him a “high degree of confidence” that the virus came from the Wuhan Institute of Virology, and replied that he had, although he declined to give specifics.

Pompeo said China was still withholding virus samples he said were needed for global vaccine research. “They continue to be opaque, they continue to deny access for this important information that our research or epidemiologists need,” he said.

“People say, well America is bullying the Chinese. We are demanding of them only what we demand of every nation: be transparent, be open, be a reliable partner, the very things that they say. The Chinese say they want to cooperate. Great. Cooperation is about action.” He also took aim at the World Health Organization.

“It’s not only that they didn’t enforce… the WHO needs to still demand that there be an investigation,” Pompeo said, adding that WHO Director-General Tedros Adhanom Ghebreyesus needed to be “just as concerned as the United States… and other countries that we still don’t have access to the answers we need.”

In an opinion article published in the Washington Post, China’s ambassador to the United States, Cui Tiankai, said “blaming China will not end this pandemic.” “It is time to end the blame game. It is time to focus on the disease and rebuild trust between our two countries,” he said.