Trump says his HCQ regimen winds up in ‘day or two’ 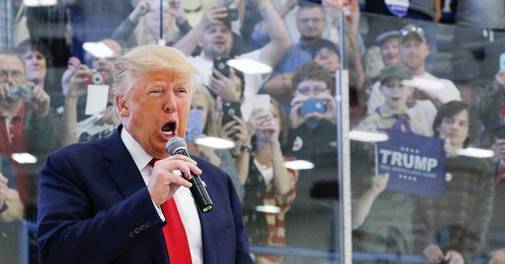 US President Donald Trump has said that the regimen of antimalarial drug hydroxychloroquine that he is taking to ward off the coronavirus will finish in the next day or two. Trump disclosed on Tuesday that he was taking the drug despite medical warnings about potential serious side effects and questions about its effectiveness in preventing the coronavirus.

“I think the regimen finishes in a day or two,” Trump told reporters at the White House on Wednesday when asked how long he will continue to take the antimalarial drug. White House Press Secretary Kayleigh McEnany defended the president’s taking of the drug as a preventive measure against the coronavirus pandemic.

“Hydroxychloroquine has been a drug that has been in use for 65 years for lupus, arthritis, and malaria. It has a very good safety profile. But as with any drug and as with any prescription, it should be given by a doctor to a patient in that context. So no one should be taking this without a prescription from their doctor,” she said.

Also read: Trump defends hydroxycloroquine, calls it a ‘line of defence’ against coronavirus

Henry Ford Hospital is doing a study on this now where 3,000 frontline workers will be taking hydroxychloroquine to look at its use as a prophylactic. “I believe there is a few hundred or 190 workers in Tampa General Hospital. So, this is being used by some,” she said in response to a question.

McEnany said there was a lot of apoplectic coverage of hydroxychloroquine. “You had Jimmy Kimmel saying the President is, quote, ‘trying to kill himself by taking it’. You had Joe Scarborough saying, quote, ‘This will kill you’. Neil Cavuto saying, ‘What have you got to lose? One thing you have to lose are lives’. And you had Chris Cuomo saying, ‘The President knows that hydroxychloroquine is not supported by science. He knows it has been flagged by his own people and he’s using it’,” she said.

“Well, Cuomo mocked the President for this. And interestingly, I found this out just before coming here that Hydroxychloroquine, of course, is an FDA-approved medication with a long-proven track record for safety. And it turns out that Chris Cuomo took a less safe version of it called quinine, which the FDA removed from the market in 2006 because of its serious side effects, including death. So, really interesting to have that criticism of the President,” McEnany said.

There are several studies that have been brought up that the President has actually mentioned, she noted. There was a French study involving more than 1,000 patients that found that the vast majority had “good clinical outcomes.” And by the vast majority, that was more than 90 per cent, she said.

Then there was an Italian study of more than 65,000 patients that demonstrated only 20 tested positive of those who are taking it prophylactically. And a South Korea study, as well. So there are several studies, she said. “And if you’re someone out there – and this is a safe drug to use – and your doctor – importantly to underscore that – and your doctor prescribes it for your use as a prophylaxis or after coming into contact with COVID, then it’s something you should take if it’s prescribed by the doctor and that’s your personal medical choice,” McEnany said.

Hydroxychloroquine sulfate was first synthesised in 1946 and is in a class of medications historically used to treat and prevent malaria. It is approved by the US Food and Drug Administration to treat malaria, rheumatoid arthritis, lupus, childhood arthritis, and other autoimmune diseases.

The drug is not FDA-approved for the treatment of COVID-19 but it has been identified as a possible treatment for the infection and the US government has requested its immediate availability. Trump has called hydroxychloroquine a “game-changer” drug in the fight against the coronavirus.

After Trump’s repeated touting of hydroxychloroquine as a “game changer” cure for the virus, the FDA issued an advisory warning that the drug has not been “shown to be safe and effective for treating or preventing COVID-19.” The Trump Administration has bought millions of doses of hydroxychloroquine and stockpiled it. India, which is one of the major manufactures of the drug, has sent several millions of doses to the US as part of its humanitarian gesture.