Trump hopes to reopen US economy by Easter; coronavirus cases in US jump by 10,000 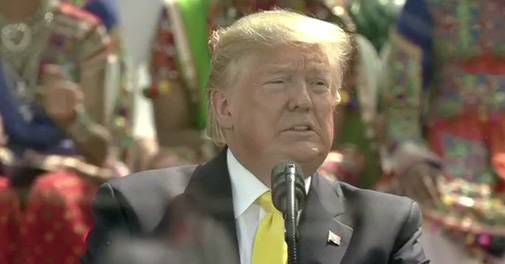 The number of coronavirus cases in the United States jumped by nearly 10,000 while about 150 Americans died in a day even as President Donald Trump hoped to reopen the country’s economy by Easter, April 12.

With millions of Americans under a lockdown, the National Guard as well as the armed forces were pressed into service in several states such as New York which saw at least 53 deaths and about 5,000 new cases on Tuesday. New York has so far reported more than 25,000 COVID-19 cases and 210 fatalities.

According to Worldometer, a website which compiles COVID-19 cases, nearly 10,000 new coronavirus cases were reported across the country on Tuesday alone taking the total to around 54,000 while the number of fatalities surged by 150 in a day bringing its total to about 700.

Apart from New York, neighbouring New Jersey, along with California, Michigan, Illinois and Florida were the other coronavirus hotspots. However, no new cases or deaths were reported in Washington, the state which was first hit by the pathogen in the US. President Trump, whose approval rating touched 50 per cent for the first time apparently because of his handling the coronavirus crisis on a war footing, put up a brave front on Tuesday telling reporters that he expects things to go back to normal in about three weeks’ time by Easter, which is on April 12.

“I want to encourage everyone to keep following our guidelines on social distancing, avoiding large gatherings, hand washing and all the other things that everybody knows they are supposed to be doing. Ultimately, the goal is to ease the guidelines and open things up to very large sections of our country as we near the end of our historic battle with the invisible enemy,” the president said.

“I hope we can do this by Easter. I think that would be a great thing for our country and we are all working very hard to make that a reality. We will be meeting a lot of people to see if it can be done,” he said and also hoped the Congress would soon vote on a USD 2 trillion bill that would deliver direct cash payments to struggling Americans.

“Easter is our timeline, what a great timeline that would be,” Trump said but asserted that his first priority was always the health and safety of the American people.

However, Director of the National Institute of Allergy and Infectious Diseases Dr Anthony Fauci cautioned against setting any timeline for resolving the crisis, saying, “You got to be very flexible.” “You can look at a date, but you got to be very flexible. And on a literally day-by-day and week-by-week basis, you need to evaluate the feasibility of what you’re trying to do,” he said.

White House Coronavirus Task Force Coordinator Deborah L Birx informed reporters that of the 3,70,000 tests done so far, 2,20000 were carried out in the last eight days. The new cases, she said, would continue to surge because the government is still working on the backlog.

“Until we can get into a 24-hour cycle, we’re going to have disproportional number of new cases compared to the actual new cases and we will let you know when we’ve reached that equilibrium,” Birx told reporters. Dr Fauci said while the focus right now was on hotspots areas like New York, there was a need to know about the level of coronavirus penetration in other parts of the country as well.

“We really need to know more about what the penetration is there Testing will always be associated via identification, isolation, and contact tracing, and you find, after a period of time, that there are areas which are very different from other parts of the country. You may not want to essentially treat it as it — just to one force for the entire country, but look at flexibility in different areas,” he said.

“What we don’t have right now that we really do need is to know what’s going on in those areas of the country where there isn’t an obvious outbreak. Is there something underneath the surface that says you better be careful and really clamp down, or what looks there that you don’t really have to be as harsh as you are in other areas,” Dr Fauci said.