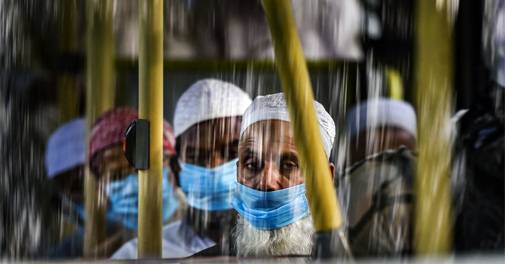 Pakistan’s top Islamic medical body has warned that mosques are becoming a major source of transmission for the novel coronavirus and urged people to pray at home during Ramzan, as the COVID-19 cases in the country rose to 13,105 on Sunday. “Mosques are becoming a major source of virus transmission,” Pakistan Islamic Medical Association (PIMA) President Dr Iftikhar Burney said on Saturday. Talking to reporters, Burney said that the infected cases have surged rapidly during the past week.

“Around 6,000 cases for coronavirus surfaced in a month.but the same has doubled in the last six days,” he said, warning that the infection would further go up in the coming months of May and June. He said the number of patients in the intensive care units (ICUs) of the public hospitals is increasing at a shocking rate. “Most of the hospitals in the country are housing more coronavirus patients that those suffering from other diseases,” he told reporters.

His remarks comes days after Pakistan’s top doctors warned of “significant mayhem” and “fatal outcomes” if mosques continue to remain open and urged the government to review its decision to allow congregational prayers during the month of Ramzan amid the deadly coronavirus outbreak.

The Pakistan government early this month succumbed to pressure from the hardline clerics and allowed conditional congregational prayers in mosques during Ramzan. However, the 20-point agreement signed by the leading clerics with President Arif Alvi on restricting access to mosques during Ramzan was not being followed completely.

Alvi has written a letter to the Imams of mosques urging them to ask worshippers above the age of 50 to pray at home. He pointed out that the point number six of the standard operating procedures (SOPs) set in the agreement said that persons over the age of 50 should avoid offering prayers at the mosque.

Alvi also visited mosques in Rawalpindi to review arrangements made by the administration of mosques to contain the spread of the virus, he wrote in a tweet. He shared a picture of Jama Masjid Ghousia and said the administration had arranged for Taraweeh (special prayers offered at night during Ramzan), keeping in mind necessary preventative measures to curb the spread. However, the face masks were lacking.

Several countries including the UAE, Saudi Arabia, Iran, Algeria, Jordan, Kuwait, Turkey, Syria, Lebanon and Egypt have stopped congregational prayers in mosques. In several Arab countries, the ‘azaan’ (call for prayer) has been amended and now it urges people to pray in their homes.

Advisor on Health Dr Zafar Mirza also took to Twitter and again urged the “citizens to demonstrate responsibility & avoid congregations during Ramzan to protect themselves from COVID-19.” However, the government was still reluctant to close down the mosques due to fear of backlash by the hardline clerics.